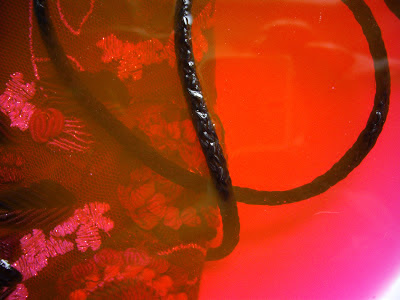 'Clytaemnestra greeted her travel-worn husband with every appearance of delight, unrolled a purple carpet for him, and led him to the bath-house, where slave-girls had prepared a warm bath; but Cassandra remained outside the palace, caught in a prophetic trance, refusing to enter, and crying that she smelt blood, and that the curse of Thyestes was heavy upon the dining-hall. When Agamemnon had washed himself and set one foot out of the bath, eager to partake of the rich banquet now already set on the tables, Clytaemnestra came forward, as if to wrap a towel about him, but instead threw over his head a garment of net, woven by herself, without either neck or sleeve-holes. Entangled in this, like a fish, Agamemnon perished at the hands of Aegisthus, who struck him twice with a two-edged sword. He fell hard, into the silver-sided bath, where Clytaemnestra avenged her wrongs by beheading him with an axe. She then ran out to kill Cassandra with the same weapon, not troubling first to close her husband’s eyelids or mouth; but wiped off on his hair the blood which had splashed her, to signify that he had brought about his own death.'